There’s no doubt that new industries generally do not have a lot of historical data behind them to understand how they impact the economy. Regardless, data collection with the purpose to analyze impact both economically and sustainably for the cannabis industry is slowly developing. One thing that we know for sure is that indoor cannabis cultivation can be input intensive activity. It requires tremendous amount of electricity, water, chemicals (fertilizers) time and effort. Growing is truly a labor of love and if you want to be doing it for the long term you better get your ducks in a row. As this article shows the input cost for electricity is anywhere from 20-50% of input cost depending on the efficiency of the operation. These costs are only going to continue to increase in time as the electrical utilities continue to raise their rates and develop new billing structures to get more money from large consumers. Growers that embrace renewable energy will have the best chance for long term survival in this ever changing industry.

This article was originally published on Mar 5, 2018 on http://www.forbes.com and authored by Ken Silverstein.

Two months into California’s law to legalize the production and distribution of marijuana, sales are going through the roof. But so, too, are their energy bills — or at least those of growers from other states who are paying thousands a month in electricity costs. 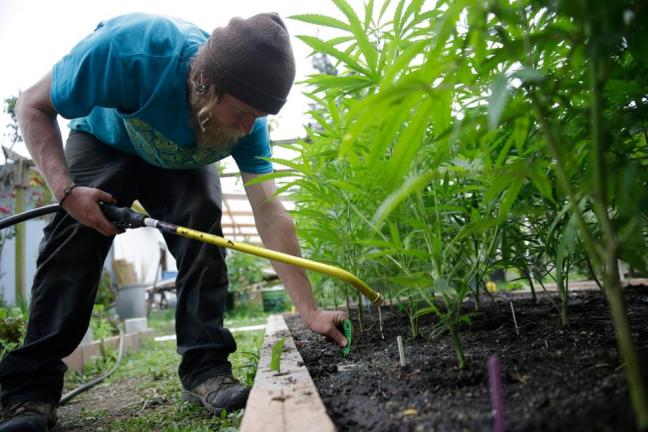 Because cannabis has historically been outlawed, producers have grown their crops indoors, and out-of-sight. And the cost of doing so has been huge, with the Lawrence Berkeley National Laboratory estimating that growing it indoors makes up as much as 1% of the electricity use nationwide. That comes to $6 billion a year. And it amounts to 15 million tons of greenhouse gases.

The nascent industry is still struggling to get its arms wrapped around energy efficiencies and especially in states like California, Colorado and Washington State that have legalized such production and that have strict air quality rules. Before that happens, though, California has to work out more pressing kinks such as getting its growers licensed. In that state, for instance, there’s an estimated 68,000 developers and less than 1% are legally licensed to take part in the industry. Growers say that right now the cost to get licensed is too high.

Thus, the barriers to entry are even greater, especially when you consider the high energy costs tied to cultivating the crop.

“Driving the large energy requirements of indoor production facilities are lighting levels matching those found in hospital operating rooms (500-times greater than recommended for reading) and 30 hourly air changes (6-times the rate in high-tech laboratories, and 60-times the rate in a modern home),” writes Evan Mills, in a report he authored called “The carbon footprint of indoor Cannabis production.”

Marijuana demand is expected to grow and it is now considered a $6 billion industry — set to be $50 billion by 2026, Cowen & Co. predicts.

About 30 jurisdictions across the country have legalized it for medical or recreational uses. Just about all of that is grown indoors. As such, there is a need for constant light as well as heating, ventilation and air conditioning. Until growers perfect the art of energy efficiency, energy usage will remain the biggest expense at 20% to 50% of their operating costs.

In 2015, Colorado’s marijuana industry consumed 300 gigawatt hours (GWh) of electricity. In Denver alone, that was more than 4% of the energy demand last year, up as much as 2% in previous years. In Seattle, that figure is now at 0.3% but is expected to grow to 0.5%.

With legalization, growing cannabis crops outdoors would appear to be the optimal solution. It would certainly be lighter on the carbon footprint. While outdoor growth may be permissible in some places, it may not fit with other communities. Developers must therefore still rely on indoor cultivation, which from a quality point of view gives producers a way of controlling both the lighting and avoiding the various pests that can destroy crops.

One way to drive down the cost of indoor cultivation is to cut lighting costs, which is a big chunk of their electricity usage. To do that, they could switch to LED lighting, says Xcel Energy, in a story in the Guardian. That choice, though, also has drawbacks as it takes longer to grow the crop using LEDs. Another way is to use solar-powered roofs, although this would require an upfront capital expenditure.

“Based on information collected from cannabis growers in Washington and Colorado, where recreational marijuana production is legal, the Council’s forecast of electricity use in the indoor production of cannabis ranges from 185-300 average megawatts region-wide over the 20-year planning horizon,” John Harrison said, in a blog for the Northwest Council. “That amount of power is roughly equal to the annual electricity use of 126,000-204,000 Northwest homes.”

For their part, utilities now have a burgeoning new industry that is demanding electricity and increasing their revenues, all at a time when new energy-saving technologies have cut into their profits.

At the moment, both the utility and cannabis industries are learning and gathering data to make better future decisions. It’s a complex market for cannabis entrepreneurs — one that requires enough operating capital to afford not just the licensing procedures but the electricity costs as well. The learning curve, however, is becoming less onerous as an increasing number of jurisdictions are making marijuana use less risky.

This article was originally published on Mar 5, 2018 on http://www.forbes.com and authored by Ken Silverstein. To see more of his articles go to his bio.