California has established an ambitious goal of relying entirely on zero-emission energy sources for its electricity by the year 2045.

Gov. Jerry Brown signed a bill mandating the electricity target on Monday. He also issued an executive order calling for statewide carbon neutrality — meaning California “removes as much carbon dioxide from the atmosphere as it emits” — by the same year.

“This bill and the executive order put California on a path to meet the goals of Paris and beyond,” Brown said in a statement. “It will not be easy. It will not be immediate. But it must be done.”

As the Trump administration rolls back federal efforts to combat climate change, California has actively pursued a leading role in the international fight against global warming. 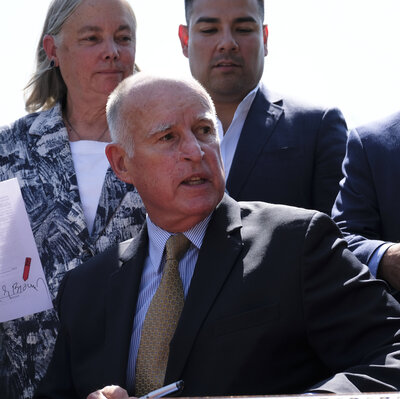 The bill specifically requires that 50 percent of California’s electricity to be powered by renewable resources by 2025 and 60 percent by 2030, while calling for a “bold path” toward 100 percent zero-carbon electricity by 2045. (“Zero-carbon” sources include nuclear power, which is not renewable.)

California is not the first state with such ambitions — in 2015, Hawaii established a goal of 100 percent renewable electricity sources by 2045.

But, as KQED’s Lauren Sommer reported last year, “California uses about 30 times more electricity than Hawaii and is the fifth largest economy in the world.”

California already gets a substantial portion of its electricity from renewable resources.

But the supply of renewable energy varies from day to day — even moment to moment.

NPR’s Planet Money reported that on a sunny day this June, nearly 50 percent of the state’s electricity came from solar energy alone. 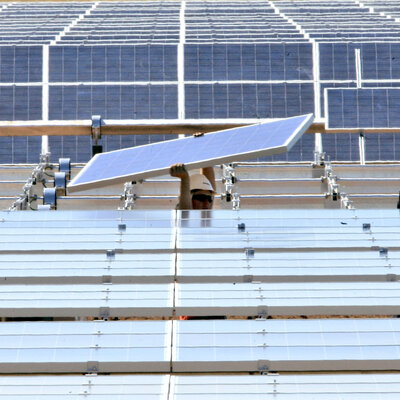 But as Sommer reported last year, that variability means it’s tricky to get renewable energy supply to match up with electricity demand:

“The sun and wind aren’t always producing power when Californians need it most, namely, in the evening.

“The state’s other power plants, like natural gas and nuclear, aren’t as flexible as they need to be to handle those ups and downs. Hydropower offers the most flexibility but is scarce during drought years.”

The new bill was supported by Democrats who emphasized the damaging consequences of climate change, while opposed by state Republicans who highlighted the policy’s financial costs, Bradford reported.

California’s utilities had been on track to meet the previous goal, of 50 percent clean power by 2030, “but scientists debate whether cost-efficient 100 percent clean energy is feasible or if it would require new technological advances,” Bradford wrote.

Some cities across the U.S. have attained 100 percent renewable electricity or energy supplies — including Aspen, Colo., Burlington, Vt., and Georgetown, Texas.

And earlier this year, for one entire month, Portugal produced enough renewable energy to meet its entire electrical demand — although the country did rely on fossil fuels to balance out the periodic disconnect between supply and demand.

As NPR reported at the time:

“For most countries in the world, a fully renewable energy supply still seems like a challenging target. Some small island nations have managed it — and a few larger countries, too.

“Iceland and Norway meet essentially all of their electrical needs through hydro and geothermal power, and have for years — but those countries take advantage of extraordinary geology, making the accomplishment hard to replicate.

“Several small islands are all-green, but larger countries are rare. On particularly windy days in 2015 and 2017, Denmark exceeded its electrical needs through wind power alone.

“And several times in the past few years, Costa Rica has kept on the lights through on all-renewable power for several months, fueled by heavy rains that fed into hydroelectric facilities.”

A previous version of this story stated that California was setting a goal for 100 percent renewable electrical energy sources. In fact, the ultimate goal calls for zero-emissions sources, which include renewable resources as well as nuclear power, which is a non-renewable zero-carbon energy source.

This article was originally published on http://www.npr.org on Sept 10, 2018 by Camila Domonoske

The passage of Proposition 64 in November 2016 allows the state to license and regulate recreational marijuana cultivation and businesses.

“Cannabis is a legal crop in our state, like almonds and tomatoes. Agricultural growers now will be eligible for the same rate and energy efficiency programs as farmers of other crops,” said Deborah Affonsa, vice president of Customer Service at PG&E.

The agricultural energy rate does not apply to residential customers who can legally grow up to six marijuana plants inside a private residence per the state Adult Use of Marijuana Act.

Cannabis growing operations can use an extremely large amount of electricity and are considered to be equivalent to other energy-intensive operations such as data centers.

“We’ve met with representatives of the emerging legal cannabis industry and listened to their needs. We are here to help our customers make smart, efficient and affordable energy choices. Now that cannabis is in California’s future, our next step is to work with these new agricultural customers and make this industry as energy efficient as possible,” said Affonsa.

PG&E’s agricultural rates are under the jurisdiction of the California Public Utilities Commission and the state of California.

The United States’ legal cannabis industry is gearing up for immense growth. A total of 30 U.S. states have now legalized the plant for medicinal use and many more expected to follow suit. Let’s not forget about the nine states that have permitted the plant for adult-use, too.

Home to some 325 million people, the United States of America boasts a strong economy and perhaps the world’s most addressable cannabis market. With more U.S. states embracing cannabis reform and scientists unearthing the plant’s medicinal benefits, it’s not really surprising that the U.S. cannabis sales are fast-approaching an all-time high.

By 2025, the global cannabis market is expected to pull in $150 billion, with the U.S. contributing to a significant portion of that figure. Based on statistics gathered by Pew Research Center, 61 percent of Americans say the use of cannabis should be legalized. This is in indication of a rapid shift in opinion on the five-fingered green plant. Back in 2000, a mere 31 percent of the population supported cannabis legalization.

According to the 2017-2018 edition of the Cannabis Benchmarks’ Annual Review and Outlookon the U.S. cannabis market, the market’s wholesale value in 2017 peaked at $5.7 billion; a figure that is four times larger than the value of the U.S. tobacco market and almost as big as the wheat market!

Cannabis Stocks are Skyrocketing in These U.S. States

If you’re an investor with your eye on the prize, make sure you seek out the most profitable cannabis markets that Uncle Sam has to offer. The following weed-friendly places on the map are contributing to the bulging U.S. cannabis market:

Investing in the U.S. Cannabis Market

The growth rate for cannabis is in a league of its own. It is one of the fastest-growing industries on the planet. One of the major appeals for investors is the diversity in cannabis stocks that are currently trading on over-the-counter (OTC) exchanges. Should you be interested in investing in cannabis stocks, remember that many businesses in the cannabis sector lack access to financial institutions. Nonetheless, it is possible to get a sizeable return on investment (ROI) if you keep a close eye on cannabis stocks. Moreover, the industry comprises more than just cannabis cultivators. Suppliers and ancillary cannabis businesses make up a major segment of the market, so you have plenty of investment options at your disposal.

This article was originally published by Beth Jenkins on Aug 3, 2018 @  http://www.cannabisfn.com

California’s commitment to set goals to limit emissions output is paying dividends. The state appears to have hit its first target for cutting greenhouse gases and it reached the goal 4 years early.

Data released Wednesday by the California Air Resources Board show that the state’s greenhouse gas emissions dropped 2.7 percent in 2016  the latest year available to 429.4 million metric tons. That’s slightly below the 431 million metric tons the state produced in 1990. California law requires that the state’s emissions, which peaked in 2004, return to 1990 levels by 2020. They have a blueprint, goals and a culture to make positive change towards the climate. They have a blueprint, goals, a culture and leadership paving the way utilizing renewable energy to do so.

The emissions drop in large part reflects California’s fast rising use of renewable power. (Yessss!!!!)  Solar electricity generation, both from rooftop arrays and large power plants, grew 33 percent in 2016, according to the air board. Imports of hydroelectric power jumped 39 percent as rains returned to the West following years of drought. Use of natural gas for generating electricity, meanwhile, fell 15 percent. What does this all mean? Essentially, California is improving it’s air quality, moving into a new economy of growth and keeping it’s environment in tact for future generations.  This isn’t the end of it, they have goals to reduce emissions 40% by the year 2030.  The complete list of data across different emission sources is found on their website www.arb.ca.gov

Call us at 480.636.0321 to learn how to lower your carbon footprint, activate your sustainability plan and lower your operating costs with solar electricity.